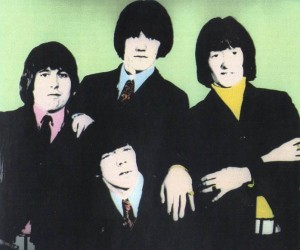 The Rockin’ Vickers were a 1960s English rock and roll band from Blackpool. They were originally called Rev Black and The Rockin’ Vicars, then abbreviated to The Rockin’ Vicars, but in order to have a chance to get more gigs or even a record contract, they changed their name to ”Rockin’ Vickers”. The band is most notable for featuring Lemmy, who went by the name Ian Willis at the time, later of Hawkwind and more famously Motörhead, as a guitarist (Lemmy did not start playing bass until joining Hawkwind). Their last single ”Dandy”, a cover of The Kinks song, was produced by Shel Talmy.

Formed in 1963, the band built their reputation as did many other beat groups of the era, by covering R&B and Beat standards, but soon became known for their unusually intense live shows and outlandish stage costumes, dressing as vicars and Sami. Although mainly popular as a local act around Blackpool, England, the Vicars also toured mainland Europe, being one of the earliest British rock bands to perform behind the Iron curtain when they played in Yugoslavia in the summer of 1965. They were particularly popular in Finland, where they recorded a single, a rocked up version of Zing Went The Strings of My Heart. They released four singles. The band split in 1967.

In 1967, expatriate Blackpool musician Dave Rossall (ex-Bruce & The Spiders), carrying on the tradition of the English band, formed his own Australian band called Rev Black and the Rockin’ Vicars (1967–1969). The Australian band went on to release four singles in its own right, toured extensively around Australia and made the Brisbane Top 40.